The official homepage of Ohori Park Japanese Garden is translated using an external, automated translation service. When using this service, please be aware of possible discrepancies with the original Japanese content of the homepage that may occur with automated translations. Please be sure to refer to the Google Terms of Service.

* No admission is charged for children less than six years old, people aged 65 and older, people with disabilities and their carers. (Please present identification to confirm age such as a senior citizen certificate, health insurance card or driving license, or a physical disability certificate, rehabilitation certificate or mental disorder health and welfare certificate).

For tourists from outside Japan, the admission fee will be discounted as a group rate when showing the “Fukuoka City Visitor’s Guide” at the window. The guide book was published by Fukuoka Convention and Visitors Bureau and is available at the airport, tourist information centers, etc.)

Normally, visiting the teahouse and tea ceremony building is by reservation only and an admission fee applies, but on the first and third Tuesday of every month admission is free. On those days, a green tea and Japanese sweet are served at a charge of ¥300.
Enjoy a traditional Japanese teatime while gazing at the Japanese-style garden.
■Green tea service (Japanese sweet included) charge: ¥300
*Japanese garden admission fee still applies. 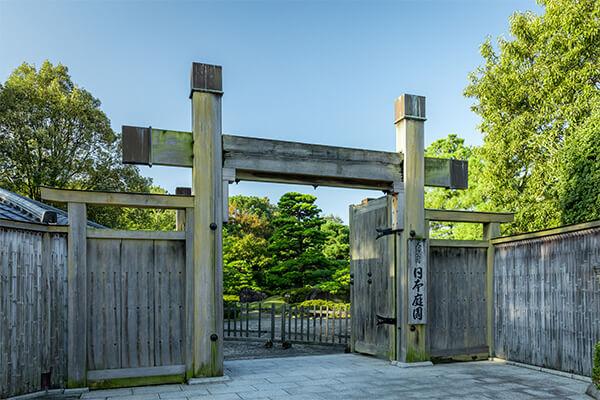 This area was once an inlet of Hakata Bay, and when Nagamasa Kuroda constructed Fukuoka Castle in the Keicho era, the north side was reclaimed and made into the outer moat around the castle. The park was constructed for the Eastern Industrial Exhibition held in Fukuoka in 1927, and it was then opened as Ohori Park in 1929.
Created in 1984 to commemorate the 50th anniversary of Ohori Park, this Japanese garden has a central pond and artificial hills and forests. It has an area of 12,000 square meters, and is surrounded by forests and roofed whitewashed earthen walls. The main features of the garden are its large pond, artificial hills and a nearby pond, a meandering stream, dry landscape garden, a sukiya-zukuri style teahouse with an attached teahouse garden, and more. Visitors can stroll along the paths that connect these many features.
The artificial hills cut off the sounds of the city with its densely planted trees. A large waterfall has been arranged in the center, and there is also a mountain torrent in the hills valley as well as a nuno-ochi (“linen-falling”) waterfall in the eastern hills, presenting a spectacle of deep mountain valleys. The space allocation and rock arrangement were designed using garden-creation techniques from the Middle ages, a period when Japanese gardens were at their technical and artistic peak. Also, the downstream flow leading to the large pond as well as the small pond and dry landscape garden are based on the tranquil, bright and unrestrained garden-making styles of early modern times. 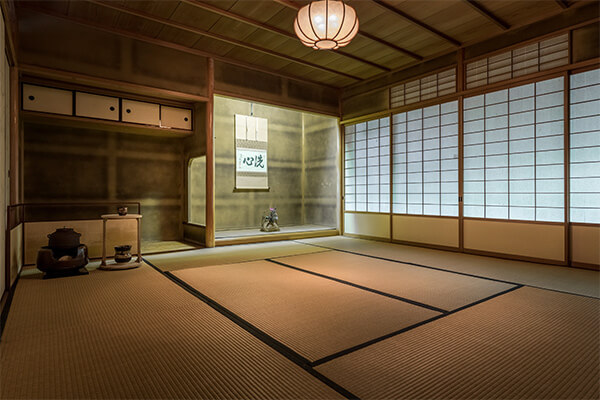 The teahouse is built on the northside of the large pond. It consists of a soan-style (small grass-thatched hut) teahouse for holding traditional tea gatherings, a tea ceremony building for large tea parties, and a ryurei-style teahouse with chair seating, which are arranged in an L-shape. Its external appearance as a sukiya-zukuri style teahouse achieves a perfect balance with the garden scenery.
The front garden of the tea ceremony building is an outer teahouse garden that leads to the teahouse. The west side is a high hedge with hair moss spreading over the ground surface. There are also stepping stones of natural rock as well as a stone washbasin and garden lantern, creating an ambience of quiet refinement.
The inner teahouse garden leading to the teahouse from the cypress bark roofed inner gate is surrounded by high forest and a bamboo fence; and stepping stones, a stone washbasin and garden lantern are arranged in the moss garden. Also, the koshikake-machiai (a simple styled bench for guests to wait for a tea ceremony) and bolted gate are set in the Rikyu era style, creating a world of subtle grace and peacefulness.

Kinsaku Nakane
One of Japan’s most prominent gardeners and landscape gardeners. Has created Japanese gardens at the Adachi Museum of Art, Nijo Castle, and Boston Museum of Fine Arts.
Masao Nakamura
No.1 teahouse sukiya-zukuri architectural researcher in modern-day Japan. Has worked on teahouses at the Guimet Museum of France and the Nordic Museum of Sweden among others.